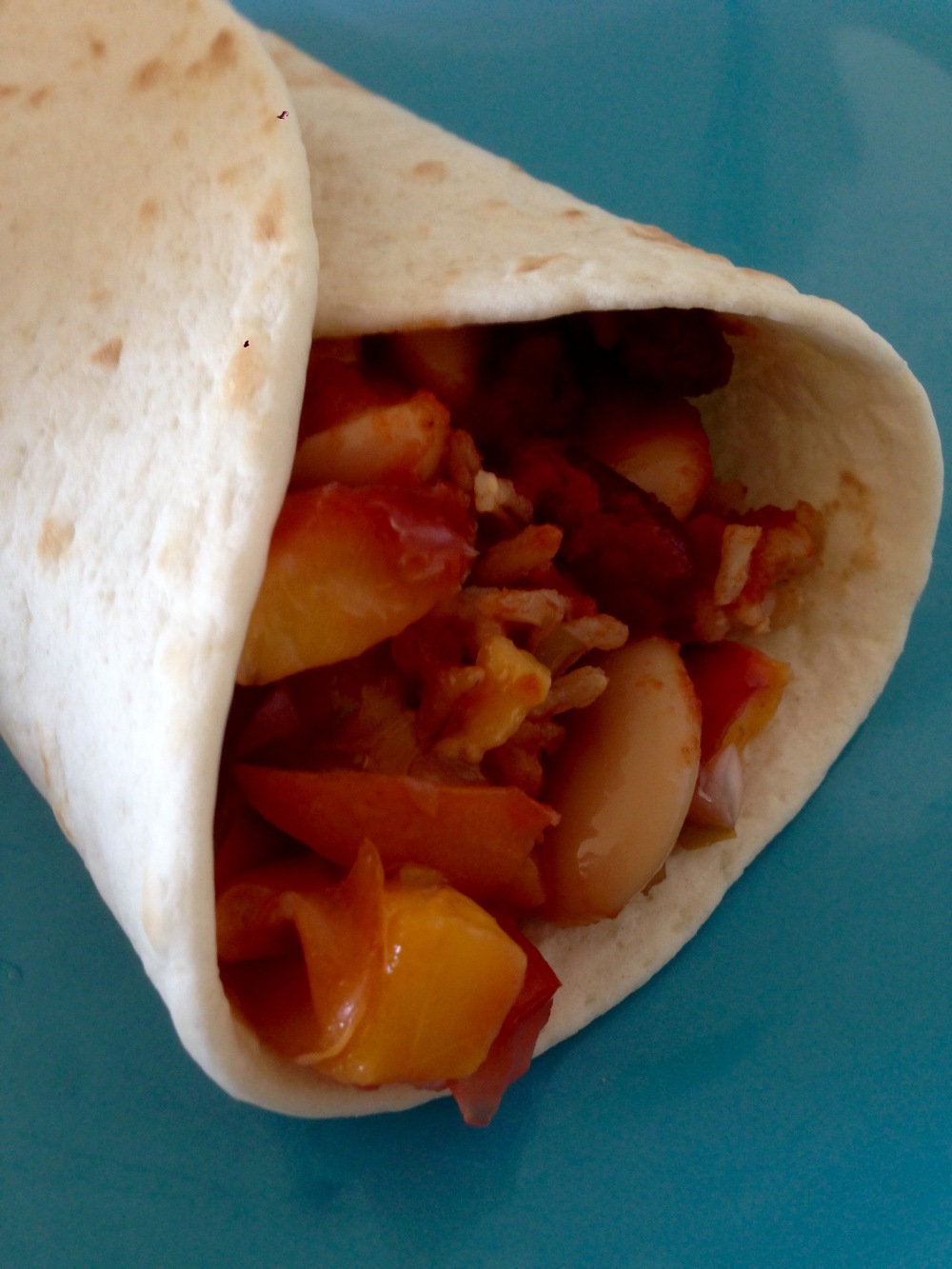 Okay, so I’ve been dying to try the BBQ Burritos with the grilled peach salsa. The peach salsa especially. It looks so mouthwateringly-good in the cookbook.

I bought all the stuff to make it, and then BAAAM!! Got a stomach bug and was out of action for 24 hours. Then I wanted to wait another 24 hours because spicy food was…well….how do I put this?…maybe not the way forward? If you know what I’m saying, wink wink, nudge nudge….pass me the toilet paper.

Anyways, yesterday I was so jumping-for-joy-ingly-ready to cook that I went a bit overboard and did 4 Thug Kitchens all in one go. It got a bit hectic in my kitchen, and even though it’s a vegan recipe I felt like there were headless chickens going into it with all the crazy running around I was doing.

I started by making some homemade stock. 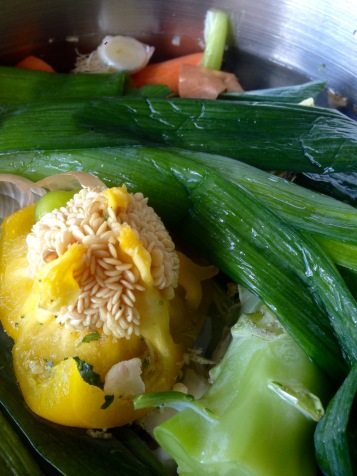 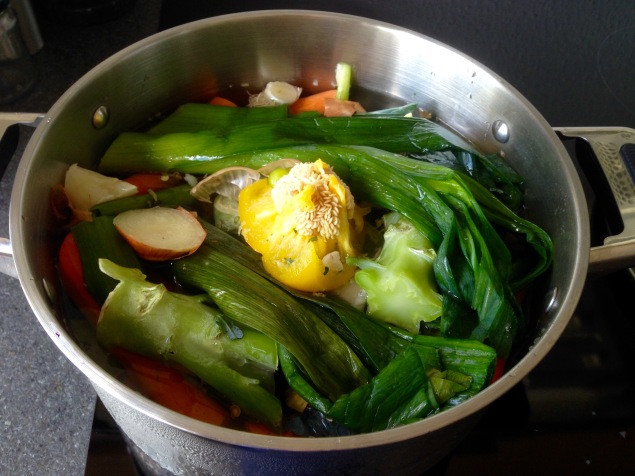 I’d been saving scraps of veggies (carrot peelings, onion ends, etc) for ages in the freezer. Since first reading TK 1, I’ve been doing this on a regular basis. It makes me feel so good! I know what you’re thinking: it’s because saving veggie scraps saves money and is less wasteful…But actually it’s because it makes me feel like I’m a witch making a potion.

There’s nothing better than standing there stirring a big pot of stinky vegetables, because trust-you-me, it’ll stink up your house like nobody’s business. Even with the windows open and the extraction fan on full-blast the house still ends of smelling like warm celery stench. I can’t think of any other words to describe it. It’s like the smell of a burp after you’ve eaten broccoli stilton soup. But standing there, stirring that shit, knowing that it’s packed full of nutritious stuff, it just makes you feel like you’re concocting some magical powerful super potion! To cure all ills. The worse it smells, the healthier it probably is. It makes you feel invincible. And that’s just making it. Imagine what sorta good it’s doing you when you actually ingest it! It’s the good shit, let’s just leave it at that. (and once the air clears it smells quite nice)

So while I was cackling away, I decided to grill myself some peaches. Because I use the grill setting in my oven it’s hard to tell when stuffs done, because there are no char marks to go by. So I kept thinking they were gonna burn. In the meantime, I realised that the Spanish baked rice needs an ENTIRE HOUR in the oven, which freaked me out because my kid was getting hungry, so I had to speed things up.

So I’m trying to prep stuff while the peaches are cooking/burning and the potion is elixiring. But it was okay. Once the Spanish rice was in the oven I started prepping the BBQ beans, and I even had time to do the dishes! Turns out that hour in the oven is not too bad after all. But there were some hairy moments there. I managed to distract my kid with some off-cuts of peach and then plunked him in the bathtub to get him the hell out of the kitchen where he had started foraging for other scraps and kept eyeing the bananas in the fruit bowl.

So it all worked out ok.

Except for the fact that I had to make a couple of substitutions. The first one was the chipotle peppers in adobo sauce. (Does anyone else just wanna call this stuff Adobe? Like the computer program?) I couldn’t find that stuff, but after searching high and low I managed to find chipotle sauce. So I used that instead and threw in a small handful of jalapenos, and hoped that might be similar enough.

The second substitution was nectarines for peaches, but that’s just because I’m a dumbass and picked up the wrong thing at the store. This is because my kid was distracting me by repeatedly putting oreos and massive salamis in the shopping cart.

And lastly, I couldn’t find pinto beans. I have no idea what they look like. So I got a can of lima beans, and a can of kidney beans and called it a day. I mean who cares, beans are fucking liars anyways, according to Thug Kitchen (page xix) so I told them to lie for me and pretend to be pintos. I don’t know whether it’s because the stock/broth/magical brew hypnotised them, or the spicy sauce dazzeled them, but no one seemed to notice that it was the wrong fucking beans. 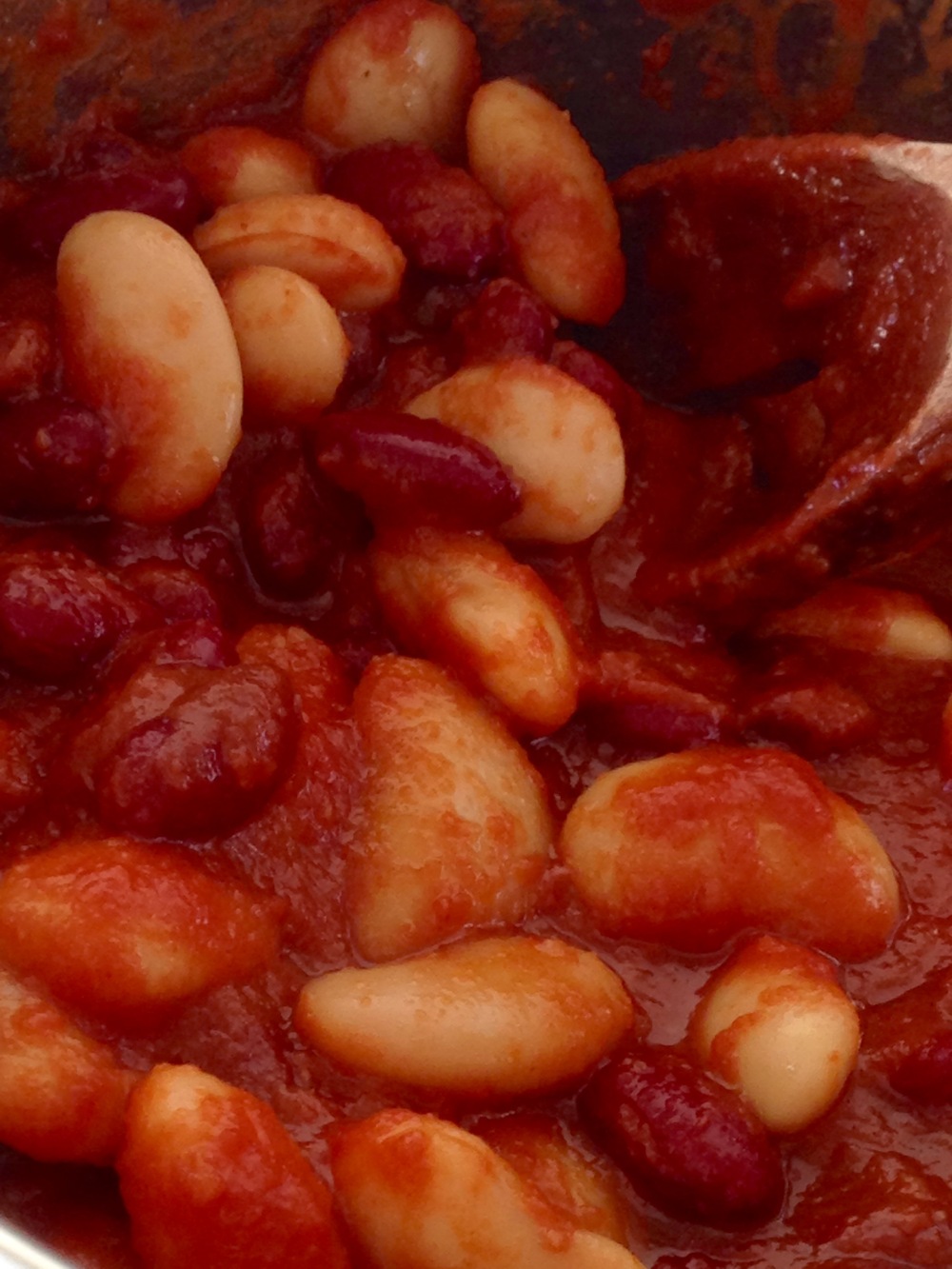 All I know is, at one point during the meal I turned to my husband and said ‘My mouth is on fire. But I don’t want to stop eating, because it’s so fucking good I don’t want to waste any of it.’

P.S. It’s still really good as leftovers the next day, even if you’re out of tortillas.

P.P.S. the rice dish is gigantic so unless you’re feeding the masses, or having it on it’s own I’d halve it.