The Thugs told us in their first cookbook to make this motherfucker stat. So I did. And my life was better for it.

If you wanna burger it up like a boss, this is the way to go. This is like a cross between a burger and a burrito. If a black bean, a chili, and a coconut had a three-way, this delicious bastard would be the result.

I made the coconut chipotle mayo. Oh my God-the Thug who came up with that is a friggin’ genius. I was amazed by how mayo-like its consistency is. And it improves with time, because the next day it was even better. And there was loads left over, so I used it in a veggie burger the next day. It had a kind of mild coconutty taste, which my hubby wasn’t a fan of, so I’ll be adding more chipotle hot sauce for him next time. But that’s because he doesn’t like anything coconut flavoured. (weird anti-coconut freak that he is. I say that with love –  His freakish ways are what attracted me to him in the first place.)

Then I threw together the beans. I was a bit scared to add as much chili powder as the recipe called for. This is because I have the chili powder from hell, which managed to reduce one of my guests to tears when I added it to the tortilla soup. So rather than add an entire tablespoon of chili powder I added half a teaspoon. 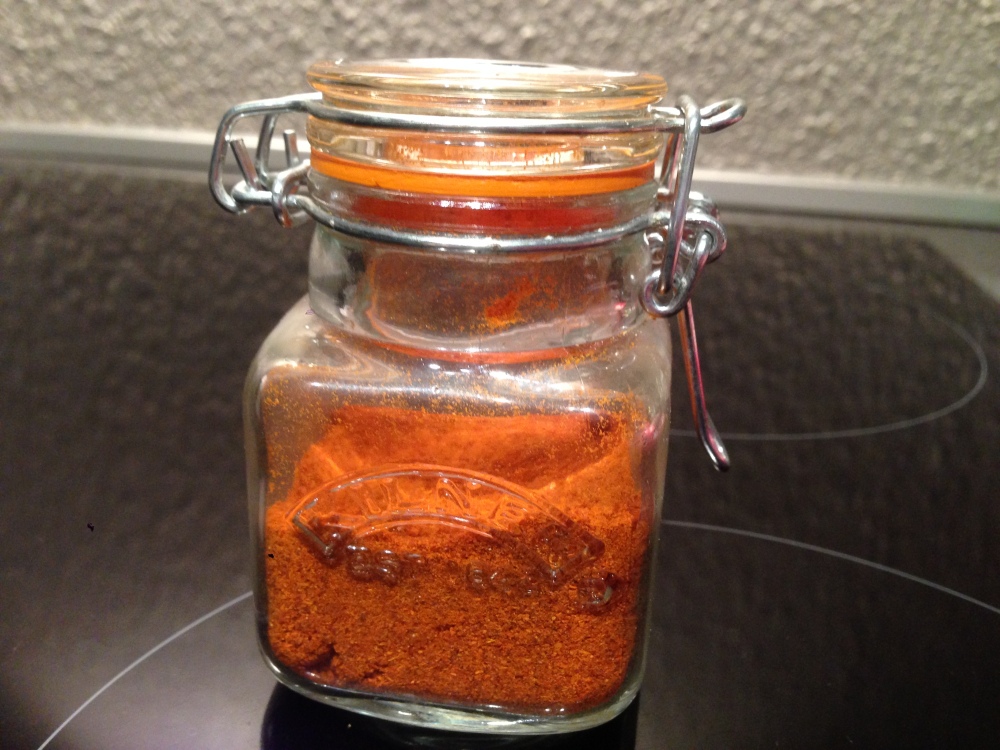 It may not look it, but this is one scary bastard. Don’t be deceived by his calm exterior. This little guy is unpredictable as fuck. You never know where you stand with him, so less is definitely  more. He is like that one weird friend you can only handle in small doses.

Anyway it turns out that this time I was unnecessarily cautious, because the coconut mayo really cools the heat from the black beans. So I should’ve just trusted the spice, and trusted the Thugs and gone to town on that shit. (Besides, if you burn the crap outta your mouth, there’s always ice cream buried somewhere in the freezer to help with that shit. Not that you ever need an excuse to eat icecream.)

I used homemade veggie broth for the creamy black beans. It was reddish this time because I’d had beets recently. By the time I’d fried onions, garlic, cumin and chili the place was smelling choice. 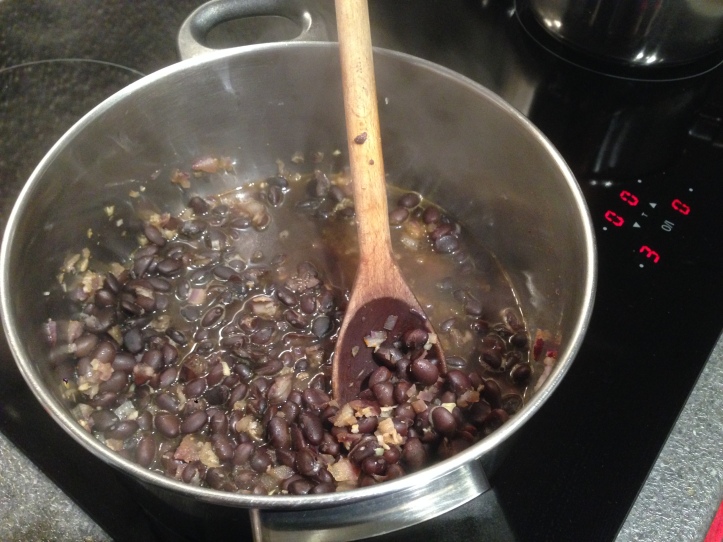 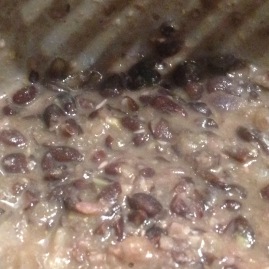 I’m not sure exactly what I did wrong, I think maybe I wasn’t paying proper attention when I was measuring out the broth, because it ended up a little soupier than the “chunky guacamole” that the Thugs had promised. Whoops. Oh well, it still tasted good.

Once the beans were done, I loaded up the rolls with black bean filling, mayo and slices of avocado, tomatoes, and red onion. 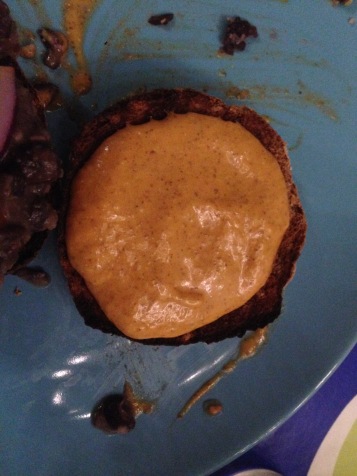 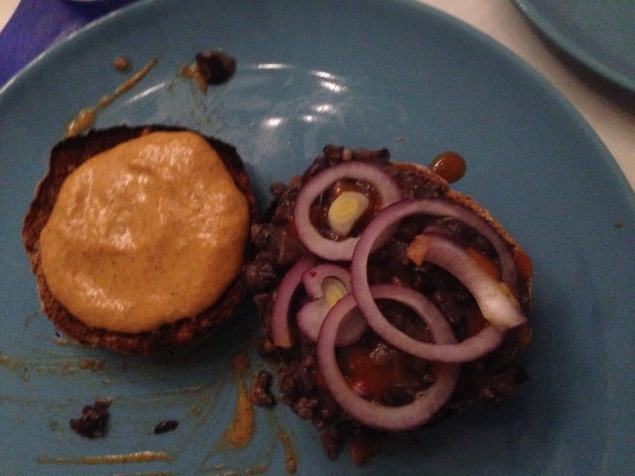 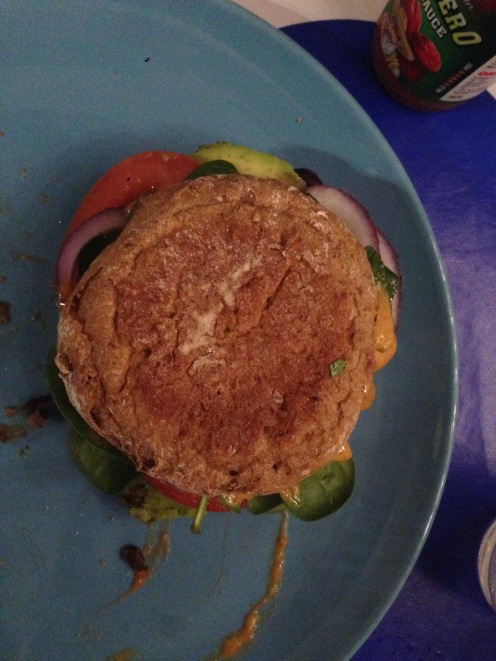 When I realised that I’d made them a tad too mild, I whipped out the habanero hot sauce and seasoned generously. The tortas were gone in less than a minute. I was already loading up the next one when I suddenly remembered to take a photo of the final product. They were just too good to not eat immediately. Just imagine sinking your teeth into these succulent bastards. 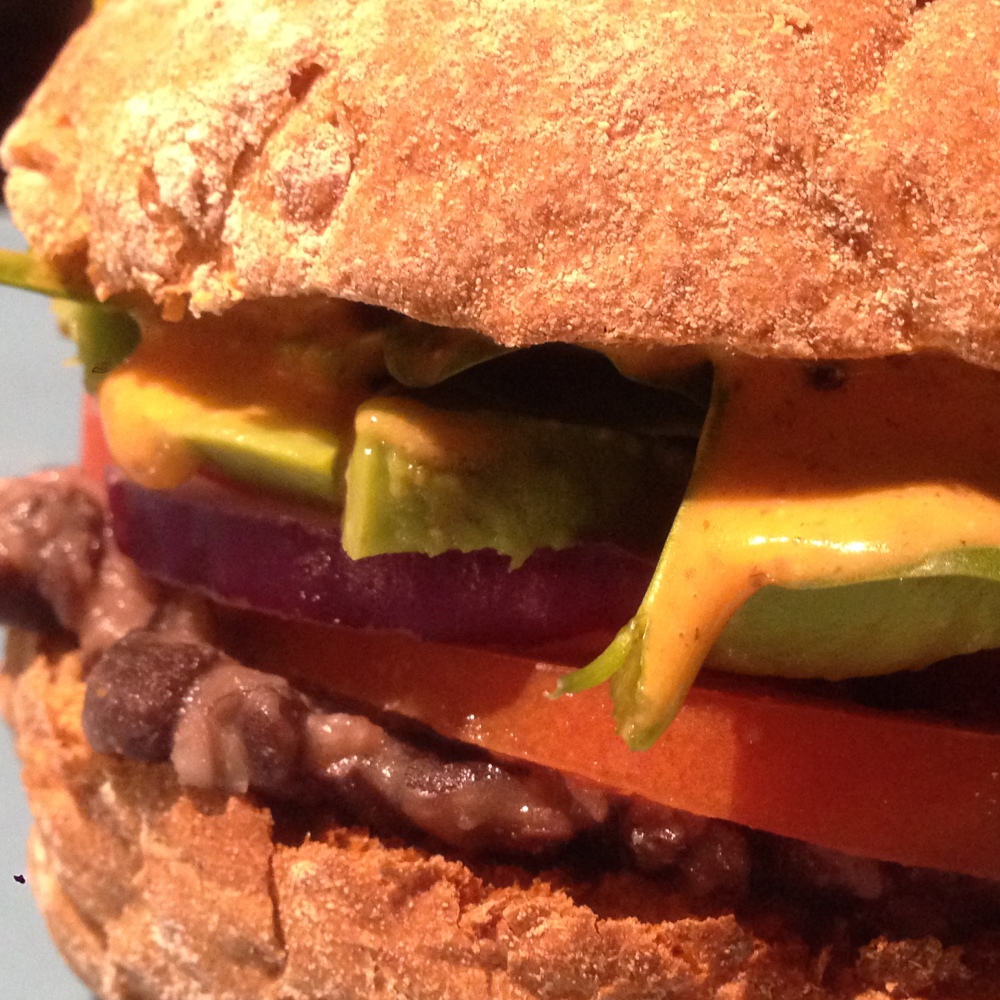 There is no pretty way to eat this. It really has ‘the soul of a burrito,’ which to me means eat in the most sloppy way imaginable. Same goes for tacos and fajitas. Anything where the insides can start falling out.

This was a good one to make. It feels like a weekend food, but doesn’t take long to make, so works for weekdays for sure. You can even make the mayo ahead of time. The first day it’s like mayo, the second it’s even better, by the third day it’s like a hummus consistency, and on the fourth day it’s dead. (small print: these comparisons are based on my opinion only. The actual texture you experience will depend on your fridge settings, and the personality of each chia seed that you have blended to make the mayo. If you get a spiteful little chia fucker with a mind full of vengeance it may be much runnier and by the time he’s spread talk of revolt and mutiny to the others, the  mayo may refuse to set altogether. VIVA LA CHIA!!)