You just KNOW you’re gonna have a good day when it starts out with french toast.

My kid was delighted.

And so was I, because the batter needs to sit for 15 minutes first so it meant I got to chill all alone in my quiet kitchen sipping coffee, having time to wake up nicely. Entirely on my own. Rather than being woken by force, by small prying fingers trying to peel open my eyelids. Rather than being thrown into wakefulness by being kneed in my “delicate area” by someone bouncing on the bed. Rather than waking up because a little person is standing over me and vomiting on my pillow. Yes. I know. This is my LIFE.

Instead, I woke up nicely and had time to contemplate shit while drinking a leisurely coffee. I stood there casually contemplating the state of my kitchen. Dirty dishes stacked precariously. Were any fucks given? No, of course not. It was french toast day.

This is my morning sink. (You don’t wanna see the rest of the kitchen. Trust me.)

After lazily drinking my coffee and slicing my bread, the flax and flour had come together with the rice milk to make a creamy batter, so I dipped my (oldish) bread in there and got down to business. 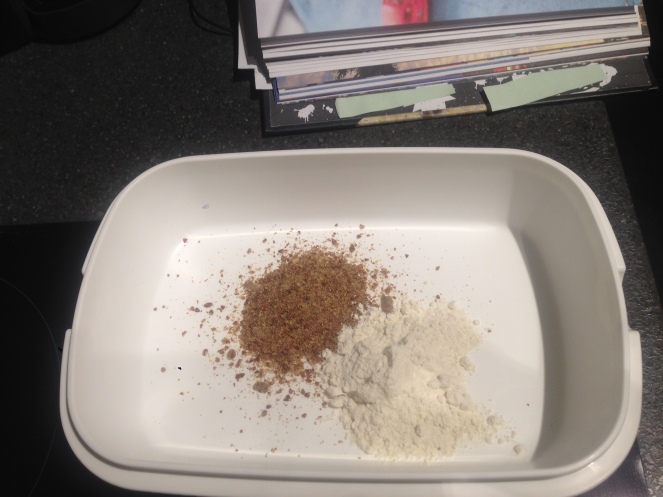 (By the way, try not to drop your fork in the batter, coz that would just be stupid.)

Once the bread had been fried on both sides it was good to go.

Easy to make, and easy to eat.

We topped it with maple syrup, sliced bananas, and strawberries. But if you wanna go all tropical on this breakfast’s ass you could add some passionfruit, kiwi or mango and take it to tiki town. You could even have a smoothie cocktail on the side and pretend you’re on holiday at a beach somewhere. Why the hell not? Beats eating dry cereal at the office. 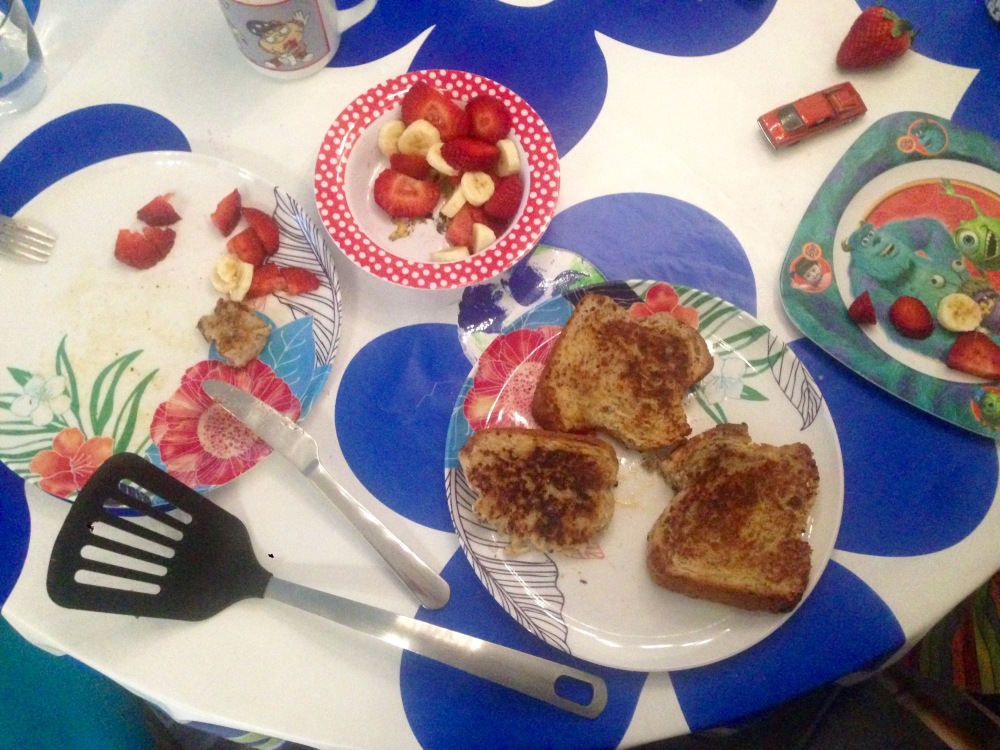 The recipe makes 6 slices of French toast. I’m not sure how many people that is meant to serve, but my son and I scarfed the lot. Then despite being full to the brim I felt it was my duty to eat the rest of the banana and strawberries too.

One of the coolest things about this recipe is that it’s vegan.

Yeah, yeah that’s great for all the obvious reasons, but did you ever think that veganizing this shit makes us less reliant on chickens? Those fuckers just want us to depend on them, to neeeeed them, to not be able to function without them. They try to seduce us into a weird codependant relationship with them where we need their eggs for fluffy cakes, and french toast. It’s part of some sadistic power trip that they’re on. Well now we don’t need those controlling bastards any more! They can take their mother-plucking manipulative ways elsewhere. We are independent, self-reliant people who don’t need to put animal products in our mouths to be happy. Chickens are trying to take over the world and they need to be stopped.

So join us on the frontlines. Put power-hungry poultry in its fucking place!

Or if you’re too lazy to leave your home to be an activist, then do what John Lennon did and start a revolution from your bed, just get someone to bring you this delicious breakfast on a tray.