reThe challenge: To cook all the goddamn recipes from the Thug Kitchen official cookbook in 365 fucking days. Without going crazy. (That last part is more like a desperate wish at this point, because we are right in the middle of moving home, but if I don’t keep blogging I won’t make the deadline.)

It’s just a quickie from here today, because we are now mid-move. Tomorrow is the final day and we are out of our old house, and securely located in our new place. Downsizing is a biatch, and she knows it. She’s the sorta bitch that laughs sarcastically as you wave goodbye to half of your possessions because there just isn’t space for them. Oh well, fuck it. Minimalism is in. Who needs stuff to be happy anyway? Not this crazy hippy.

I actually traded two sofas for three bags of pine kernels, and an easy chair for four bags of potato chips. I love it. Barter your way to happiness (and it means not having to lug furniture down to the nearest charity shop. Win-win for everyone.) 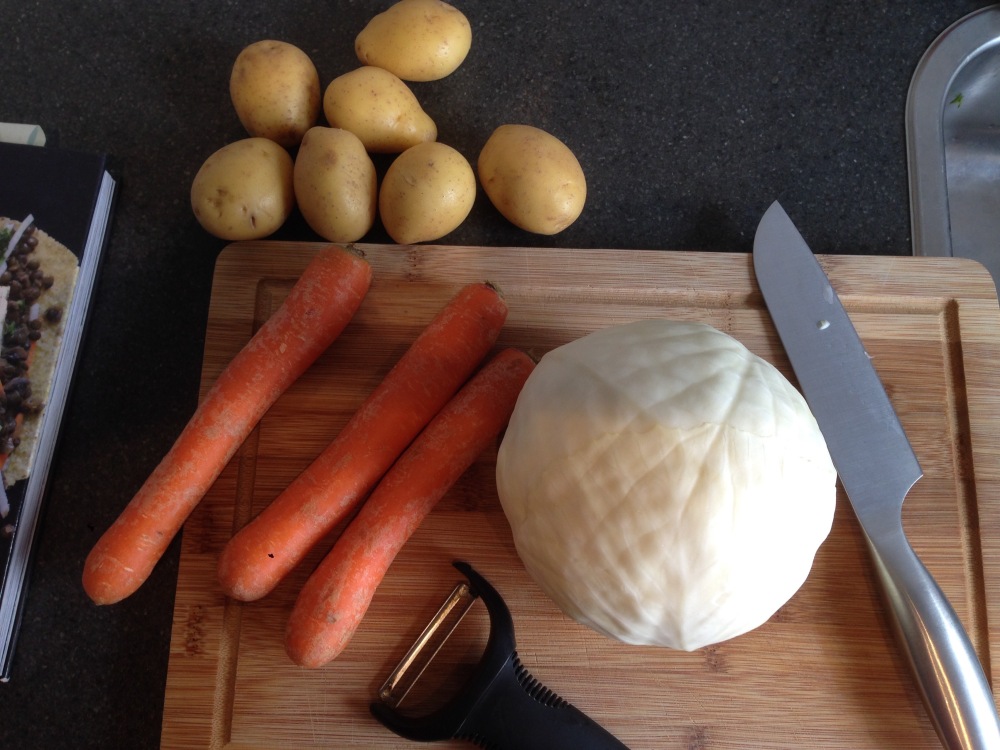 Not necessarily an exciting vegetable, right?

Wrong motherfucker. This vitamin bomb will boost your supplies of vit C and K. (according to my “sources”, who would rather not be named, as they are sort of shy.)

This makes an excellent side dish, as once the chopping is done and it’s in the oven it pretty much takes care of itself.

Once it’s in the oven covered with oil and broth, you can spend your time doing more important things like napping, catching up on social media, or packing more boxes. You could even clip your pet’s toenails. Whatever floats your boat.

Allow enough time to prep the potatoes though.

This is the only point in the recipe where I felt uncertain. The Thugs said to cut the potatoes in half, into chunks the size of the head of a soup spoon. That sounds a bit uniform, the potatoes would have to be tiny to be in halves but also to be exactly that size. So I thought fuck it, some will be sliced thinner than halves, because my bag of potatoes is as diverse as the peoples on this big round planet.

Once the potatoes are chopped, you grab the other shit out of the oven, and throw them in. DON’T DO WHAT I DID. Don’t forget to turn the cabbage before adding the potatoes, or else you’re gonna be fucking around with flipping a bunch of shit, and trying not to spill veggies out of the baking dish, and wishing you’d thought to close the oven door because now you’re sweating, and all the heat is escaping out of the oven. 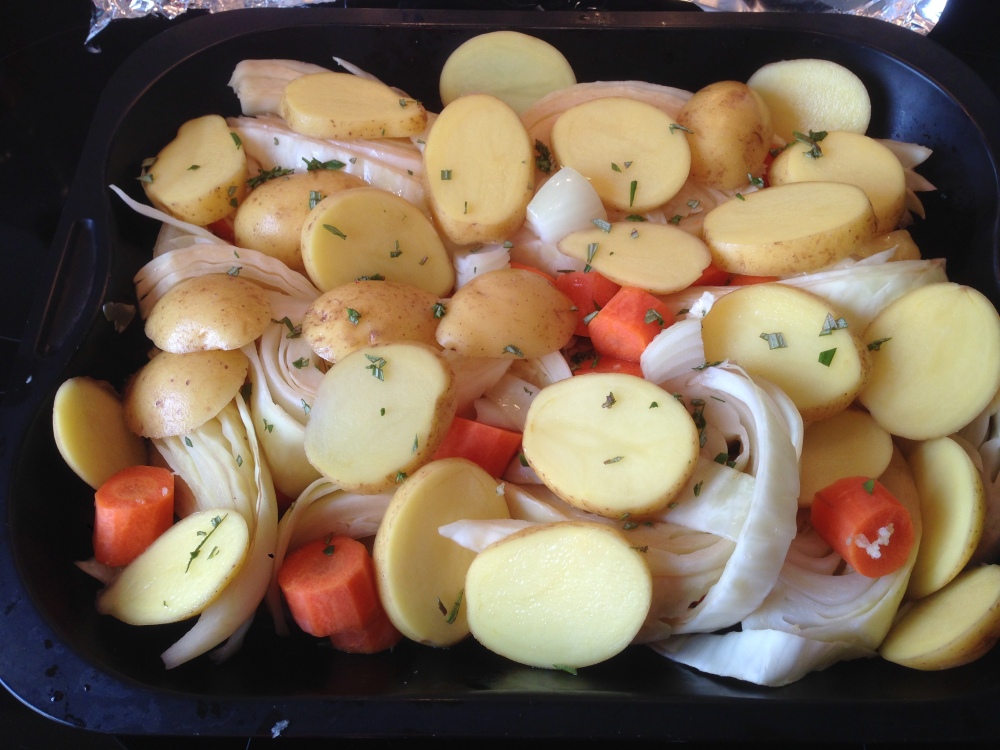 Don’t forget the rosemary and garlic. They make this shit what it is. Delicious as fuck. *

Now I misread the recipe, because there’s too much going on right now. Sometimes I’m good at multitasking, and sometimes I’m just not. I saw it said stick back in the oven for 40 minutes, and I stopped reading. Yes. Moronic.

I didn’t see it said to take off the goddamn foil and throw it back in for another 10. By now my kid was gnawing on the tablecloth, so I served the rest of dinner and whipped the foil off the cabbage and threw it back in the oven for another 5 minutes. It should’ve had 10, and I’m 100% sure it would’ve come out better if it had a little longer, so that’s what I’ll do next time. 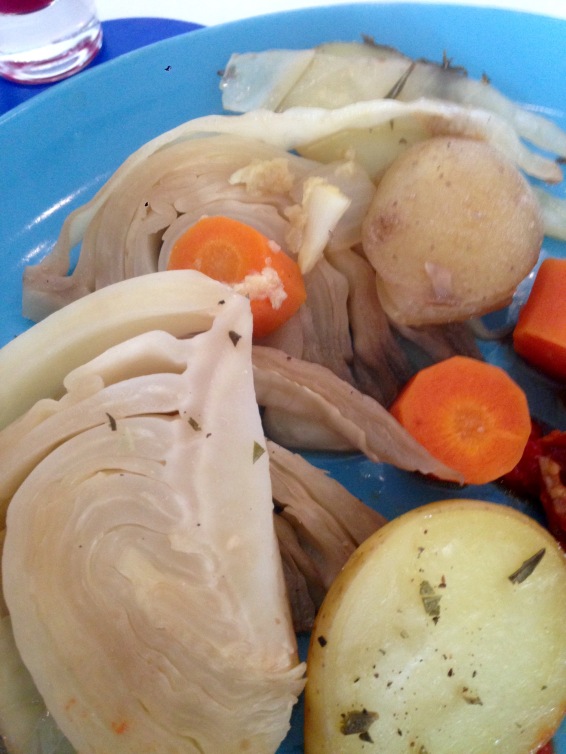 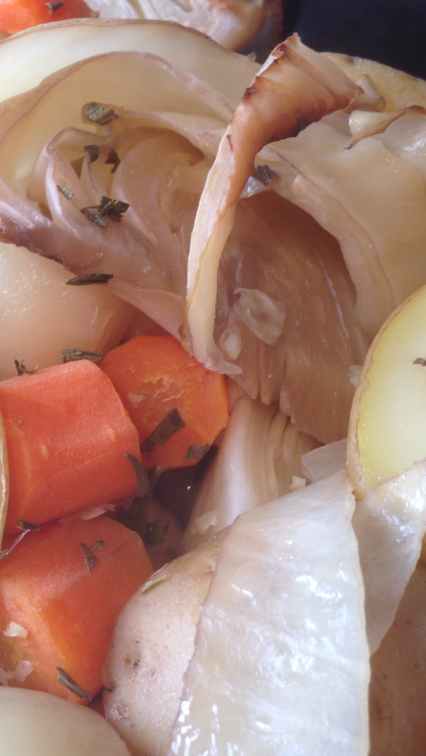 Next time I blog I’ll be installed in my new home experimenting with a new oven. Well new to me, that mofo is OLD. and desperately in the need of a deep clean.

Yipeekaiyay motherfuckers! See you on the other side!