The challenge: to cook all 115 recipes from the Thug Kitchen cookbook within 365 days.

We have moved home. After living off crappy food the last 10 days-ish I thought it was time to get back to healthier eating. Moving is stressful. Beyond stressful. It reminds us that we are primitive creatures being yanked from the safety and comfort of our familiar habitats, to be thrust savagely into new ones. There are new sounds. There are new smells. It makes me wanna pee in the corners of each room to mark new territory. (then at least I’d KNOW what the smells were).

Okay, rather than squat in the corners I thought cooking might be a less drastic way for me to connect with my new home. Getting to know the new oven (new to me….that bitch is ooooold and temperamental like my grandma when she started losing her marbles) and trying to remember where I put my soup ladle. All that sort of thing.

So cauliflower pasta is it! 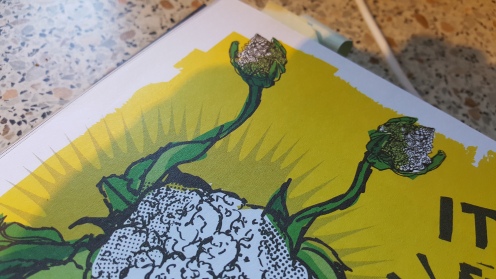 You can make this in 4 easy steps according to Thug Kitchen. In my world it took 10 steps.

Step One: Go shopping because there’s nothing in the house except for ketchup and vinegar. (Cut me some slack, we just moved)

Step Two: Make the pasta. Easy shit, you got this.

Step Four: Resort to profanity as you stub your toe searching for your food processor.

Step Five: Throw the motherless milk, cauliflower, lemon juice, olive oil, miso and the spices into the food processor and blend that shit up nice and smooth. (check page 163 of the book for specific quantities)

Step Six: Feed your child a banana before he starts gnawing on the furniture. 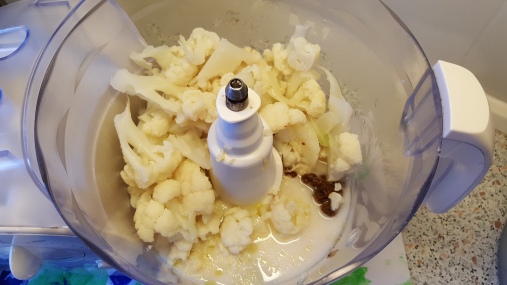 Step Seven: Combine the sauce with the pasta in the saucepan you boiled the cauliflower in. As you do this,  you realise it will never fucking fit and switch to a bigger pan. A sarcastic voice in your head yells ‘YAY! More shit to wash up later!’

Step Eight: Mentally bitch slap that voice. You’ve gotta shut that shit down, it’ll only bum you out in the long run.

Step Nine: Throw in the spinach and warm it all up.

Step Ten: It’s done! Serve with some parsley on top. 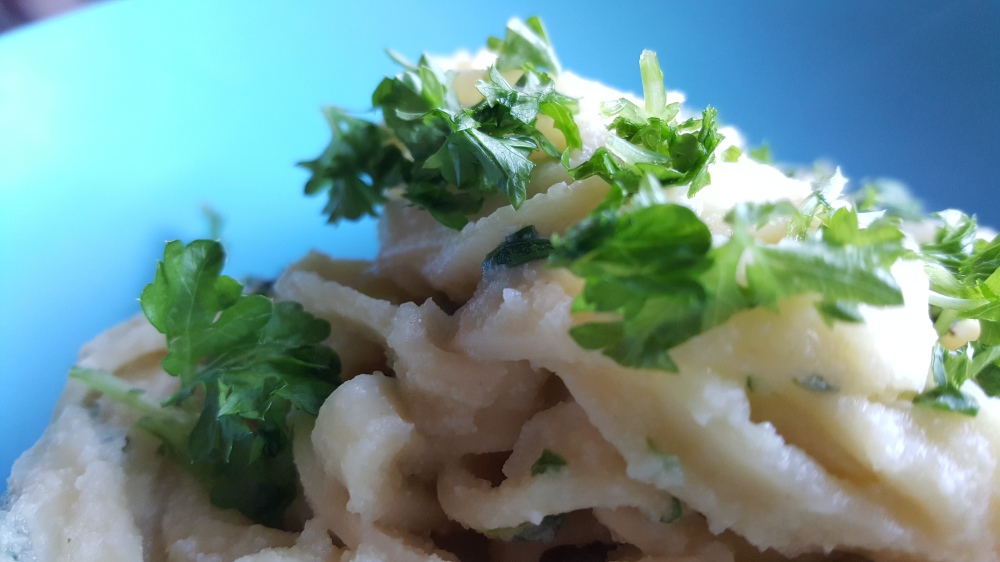 You can even throw some broccoli on the side, or some roasted red peppers or roasted asparagus like the Thugs suggested. We went for the broccoli because I know my kid likes it.

Season to taste and away you go!

This was so creamy and yummy, with just a hint of a kick from the garlic. Like a kick to the face by a mule that’s juuuust been avoided, but still sorta grazed you. And the breath the next day is also good for keeping away unwanted visitors.

Maybe I’ll eat this next time I go to see my old landlord. Give him a dose of good garlic breath.

There’s nothing better than having someone mansplain to you for thirty minutes how to clean a bathroom when you spent 4 hours the day before cleaning the shit outta it on your hands and knees, even going as far as cleaning the cracks between the tiles with an old toothbrush.

Some people are just never satisfied.

One thing I can guarantee, is that this creamy pasta will satisfy even the hungriest pasta-eating, Thug-loving human. That’s how good this is. And if they aren’t satisfied you can buy them a one way bus ticket to Fuckoffville. Make sure they travel economy class, that’s all they deserve.