The thugs promised me a relaxing-ass evening if I made this yummy pasta dish: Swiss chard and tomato linguine with balsamic-glazed chickpeas.

I’ve gotta say, I friggin needed to relax. Stress levels were creeping up to high. I hadn’t noticed just how tense I was, but you realise you’re stressed when your jaw starts to resemble the clenched asshole of a man trying not to shit himself in a crowded elevator.

So as I scanned the recipes in Thug Kitchen 101: Fast as Fuck, and it said ‘have yourself a relaxing-ass evening’ my attention was hooked right away. My jaw was urging me to choose this recipe so it could finally unclench, and my tastebuds wanted in on the action too, because balsamic glazed chickpeas just sounded too good to pass up. The fact that it was only meant to take 25 minutes to cook sealed the deal. I grabbed a large soup pot and got started right away.

Okay, first recipe divert….I had no Swiss chard, so I subbed in spinach – because they’re both green leafies. At this point I was so hungry I would’ve thrown in basil or dill just for their  colour, but it would’ve been a step too far, and the recipe would’ve been some whole other thing. I could feel the Thugs shaking their heads disapprovingly, as I perused the vegetable drawer of the fridge, so I put down the dill and went for the spinach, the safest option by far. 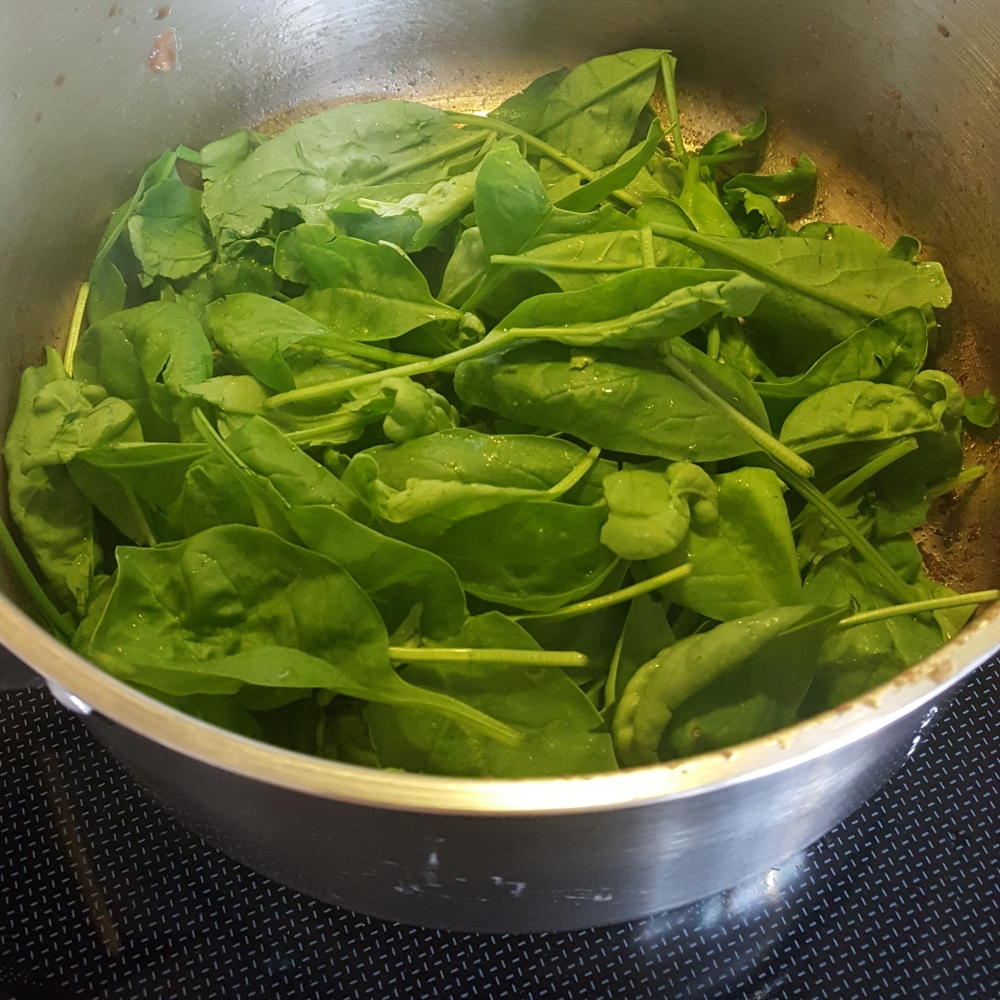 Now I don’t know if I’m just a dumbass in the kitchen or I get distracted easily, or what. But I’m telling you now, there’ no way this meal took me 25 minutes to make. I think I was trying to multitask, but in the bad way. The kinda way where you’re so stressed because your to-do list is as long as Rapunzel’s skanky-ass tangled hair, and you decide to reply to messages and emails while you cook to “save time” instead of concentrating on the task at hand. So, when I got to the bit where you’re meant to add the chopped garlic and the broth, I thought: FUCK! I still need to press the garlic! As I was scrabbling around the kitchen drawers frantically searching for the garlic press, while stirring with the other hand, and trying to remember where I put the garlic, it occurred to me that I still needed to make broth. So I needed to boil water, and find stock cubes. In the meantime the spinach was starting to look unhappy at the bottom of the soup pot. It was practically clinging to the pot now, like a hooked junkie not wanting to give up his stash.

I turned off the heat, because I was worried about how long it was taking me to boil water for the broth, while my phone was loudly pinging away with replies to the text messages I’d sent earlier. My kid came in and sat on the floor RIGHT BEHIND MY FEET, telling me stories about doom monsters (whatever they are), while he was furiously petting the cat. I eyed him nervously behind me as I poured scalding hot water into a jug and threw in a stock cube, jabbing at it with a fork to try to dissolve it faster. My son was now stroking the cat so hard, I feared for her fur, and he was asking for bananas and sliced apples to tide him over till dinner. I ran back and forth in the kitchen looking for a can of diced tomatoes, reassuring him that dinner was nearly ready, while the pasta boiled over on the stove. My phone was still peeping away, telling me I had messages, and randomly an alarm went off that I didn’t remember setting.

I finally got the broth and garlic and tomatoes and all the other delicious crap in there, and I managed to fold the pasta in when the time was right. I sighed a sigh of relief, thinking it was all over. Then I realised the kalamata olives I’d got were not only still whole in the jar, and not pre-sliced, but also the jar had already been opened and they were of questionably age. I couldn’t remember when we opened them but it was probably a month, or two, or three ago. It was before we moved house, that much I knew for sure. So I had to find the olives that looked the least ‘wrong’ and quickly chop them up. I gave them the sniff test and then chopped them as fast as I could. I wasn’t sure, they looked a bit off. By now my son had run off with a banana, so I had no time to lose, so I threw the olives in and hoped for the best. By now both my jaw and my blood pressure were screaming.

I topped with the balsamic glazed chickpeas and served it all up.

Finally we were ready to eat and I felt less than relaxed, if not more stressed than I’d felt before I started. I have no idea what time it was, time had flown with busyness, but at the same time it felt like years had passed in the kitchen that day, and I was happy to sit down.

It was good, so so good. I went back for seconds, then thirds. Even my kid was into the chickpeas. (Not so much the spinach, but hey you can’t win them all. Besides, his head was full of banana dreams and sliced apples). 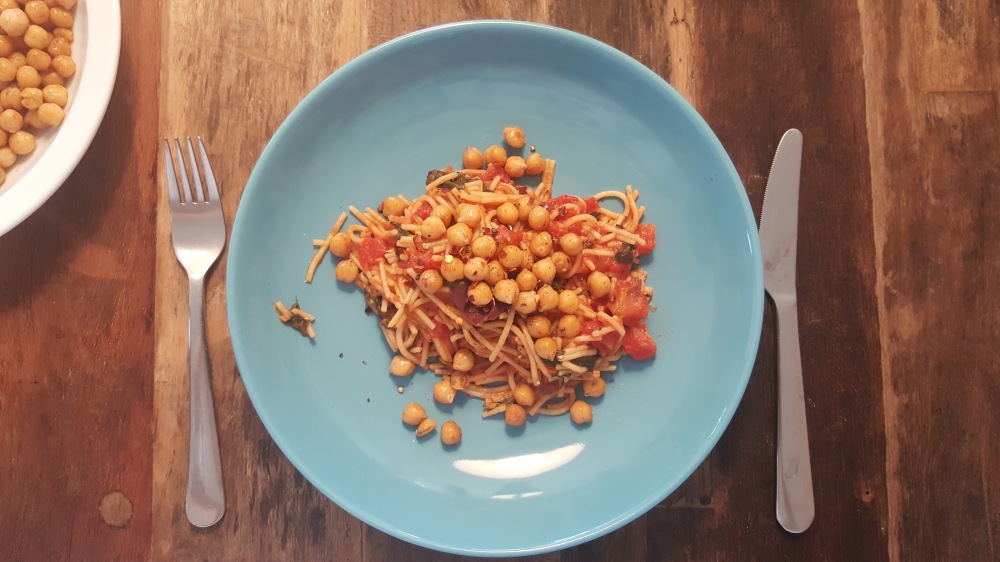 The kalamata olives and balsamic vinegar gave it a fresh sorta tangyness, and combined with the sweetesness of the tomatoes it all balanced perfectly.

I would make this again, no questions asked. However, next time I might switch off my phone, pre-press the garlic, and hide our cat, and all the bananas. I don’t think my health can handle the stress of that situation again. 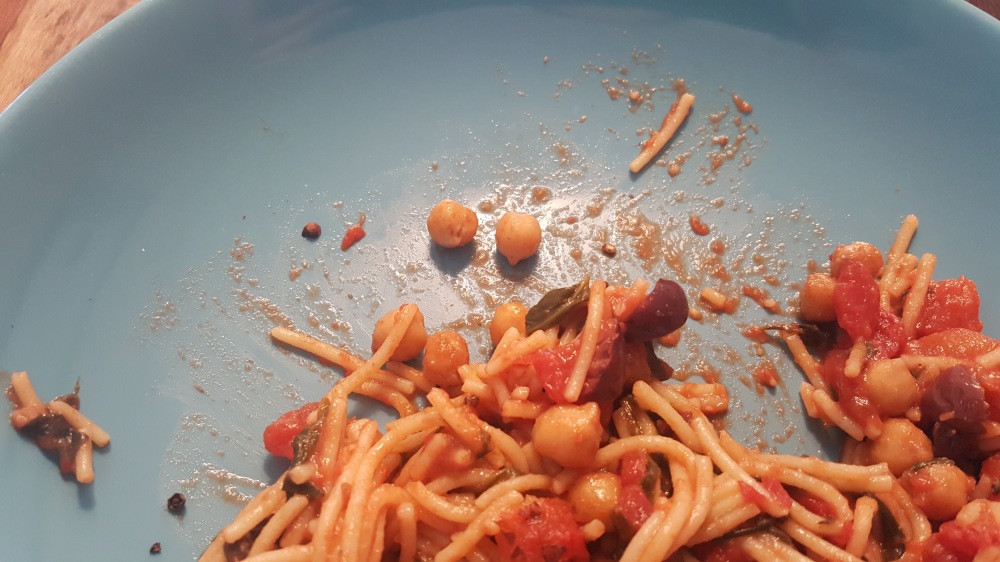