Okay, so this time I’d got my beady eyes on the One-Pot Chickpea Biryani from Thug Kitchen 101: Fast as Fuck.

I’ve actually been wanting to try this recipe since when I first got the book, but the Spaghetti Pie ended up seducing me into cooking it first. Like a lover that’s been slighted, the biryani has been trying to get my attention ever since.

Now it was Biryani time.

The Thugs had said it would take 35 minutes to achieve Biryani bliss and I decided this time I’d time myself to see if I could recreate the dish in that time, or if I’d struggle through with the usual thoughtless moronic slowness. I wanted to be faster than last time I cooked, and besides I had places to be soon, like the gym, and a child to feed before then.

I thought let’s pre-chop shit, and get the spices out so we are ready for whatever cooking shenanigans get thrown our way. (Sometimes when I talk to myself inside my head, I say ‘we’ as though there are several of us. I don’t know if that’s normal or if I should keep a shrink on speed dial.)

The first hurdle was where it said ‘1 large yellow onion, halved.’ Well, I only had red onions, but who gives a rat ass? An onion is an onion. The part that concerned me was not the colour, because I’m not an onion racist, but the fact it said ‘halved.’ I sliced the onion in two halves and looked at it, thinking there can be no fucking way they mean this. I looked at the picture in the book of the finished biryani and then back to my halved onion, and then back to the book again. Nope. I couldn’t see any random massive half onions laying around in the rice. So I sliced the onion up into long bits and carried on.

I finished chopping and prepping shit and then cracked on with business. I cooked the onions first, set them aside, then cooked the veggies next with the spices and then set them aside. My “easy to use, easy to clean” garlic press was being a real bitch, so this slowed things down. I was getting to that annoyed stage where you start swearing because I was aware the clock was ticking and I was wasting precious minutes. I didn’t have time for that shit. Eventually, after nearly breaking my wrist, I gave up on the “easy” garlic press and found another normal one and made do with that. I mentally reprimanded myself for not having used that one to start with, but I didn’t have time for negative internal chatter so I carried on. (That may just be the cure to low self-esteem and depression. Just keep so busy that you don’t have time to overthink and pick apart everything you’ve said and done during the day. Never stop moving, never stop to reflect, or rest or sleep. You’ll be exhausted but happy.) (I don’t think my hypothetical speed dial shrink would agree, but who’s he to argue? He’s not even real.) 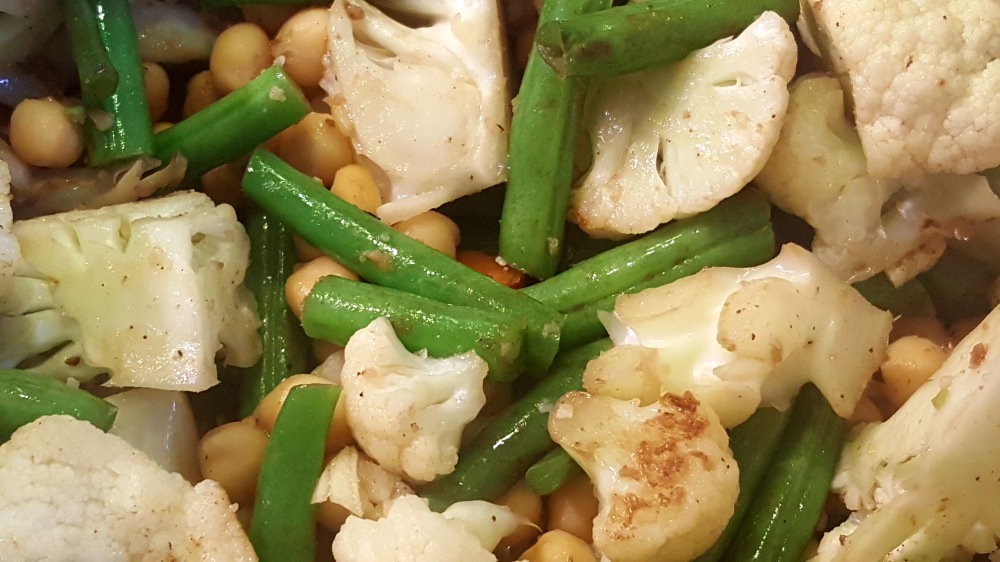 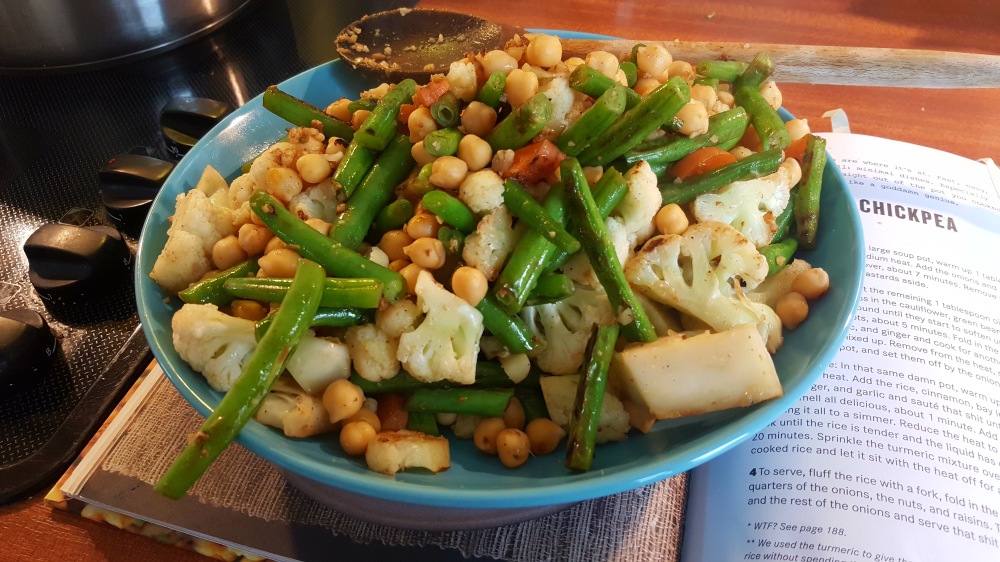 Next, on to the rice. I didn’t have any loose rice, so I grabbed a couple of boil-in-the-bag-bastards and cut them open feeling a bit like a weirdo.

Once I’d got that and all the amazing smelling spices in the soup pot I thought I’d snap photos underway like I always do.

Heed my friendly warning: When it says sauté the rice and spices for about a minute, if you stop to take pictures of the spices and rice that are sitting in the hot oil that you aren’t even stirring, it’ll smell amazing but you WILL burn your rice. This is why people take “before” and “after” pictures, not “DURING” photos. What the fucking cinnamon stick was I thinking?! 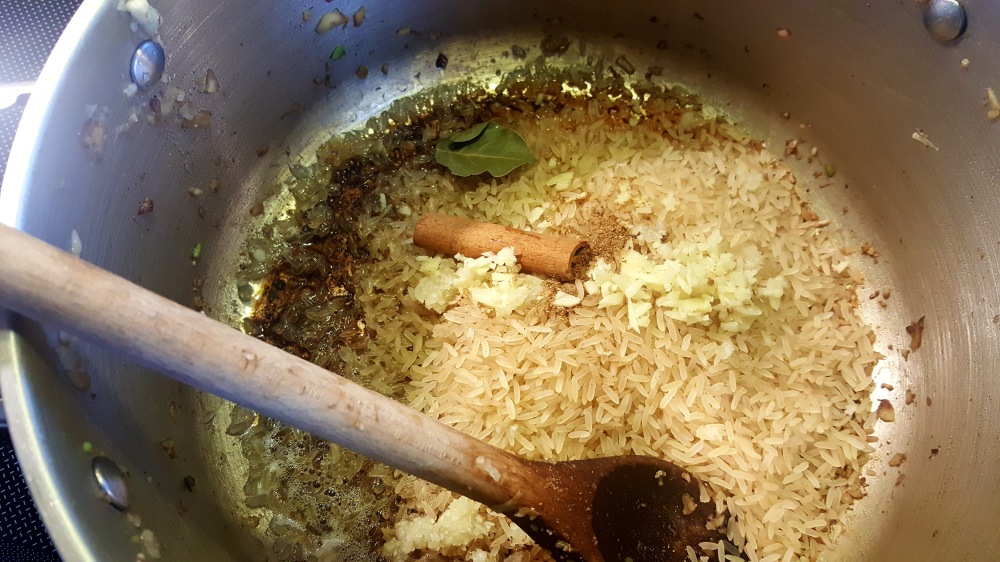 Anyways, a few cuss words and burnt spices later everything was simmering away in the veggie stock, and I had time to throw together my kid’s packed lunch for the next day and set the table. I even had time to throw on my “active wear” because circuit training was starting soon. (Not so much sleek and trendy active wear, more frayed old t-shirt and tatty leggings that are too long for my short ass legs.) My kid came in asking the weirdest shit while I was cooking. “Can I draw on the floor?” No. “Well can I draw on this chopping board then?” No.

So, the rice was good to go and I did the turmeric thing on some of it like the recipe said, and it was yellowing nicely when suddenly I realised I hadn’t bought any cilantro (that’s coriander to non-Americans) I thought, shit where can I get cilantro at short notice? I remembered our new neighbours had a funky looking herb garden so I threw on the first shoes I could find and ran outside. As I sidled up to the neighbours herbs like an amateur thief in broad day light, I realised it was no good. What they had growing wasn’t cilantro after all, but some withered dried-up version of parsley and some random tufts of lavender. FAAAAARK. Now what?

I’d have to go without.

I served that shit up, cilantroless and nude. It still tasted fucking divine.

Even with the slightly burnt rice and spices halfway through the cooking process, it was mouth-wateringly good.

I only had time for a tiny portion because I had to leg it to circuit training. I’ve heard it’s SUPER healthy to eat 10 minutes before you do loads of exercise. It’s not unwise WHATSOEVER to shove a heavy hot meal into your body just before you overexert yourself and do tonnes of stomach crunches. Just remember cramps are your friend. Pain reminds you that you’re alive.

This biryani is also great for snacking on post-work out. And late at night. And the next day. And when you’re bored. And when you have the munchies at around 4.20 in the afternoon.

I have to say though, I’m one of those worrywarts when it comes to germs, like a total scaredy-cat-germaphobe that thinks we’re all gonna die of salmonella poisoning even if there are no chickens in sight. I’ve heard some horror stories about rice that hasn’t been reheated correctly or has been left out overnight for bacteria to not just grow in, but fucking flourish all over. Those little fuckers don’t just move in, they set up high rises and build a bustling metropolis. Their busy megalopolis has got so much urban complexity that there’s even ghettos and squalor and crime. So that’s why I don’t eat rice cold the next day. I’m chicken shit (sort of ironic if we are talking salmonella), so I always make sure if I have rice the next day that it’s been stored in some sort of sauce in the fridge and heated all the way through. So when I had it the next day it was coated in a mild curry sauce (think Korma) and that was also delicious. The sauce brought out the already delicious flavours, complemented the spices the Thugs had used, and highlighted the sweet scrumminess of the raisins and the crunchy nuts.

But this dish was best served warm when it was first made fresh.

That was my favourite way to have it.

Just how the Thugs intended it.

*raises hands to the heavens in a ‘praise be’ type gesture, and bows down before the cookbook whilst chanting and making eccentric biblical hand gestures.*

I looked at the clock, and though I was nearly late for circuit training I had only shot past the estimated finish time by about 7 minutes. That was good enough for me; the person who gets easily distracted in the kitchen.

So basically to summarise, I recommend the shit outta this recipe. What the Spaghetti Pie has in seductive traits and wow factor, this dish has in full bodied flavour and temptation. The Thug Kitchen Spaghetti Pie might be the glamorous and popular, sparkly guest of honour at a party that everyone thinks is sexy, and wants to get with – but the chickpea biryani is the curvaceous, sultry beauty who stands quietly off to the side with a cocktail, needing no one but giving you come-hither eyes. Her natural beauty is irresistible, and spellbinding.

No need to resist, you might as well give in – chickpea biryani is your destiny.